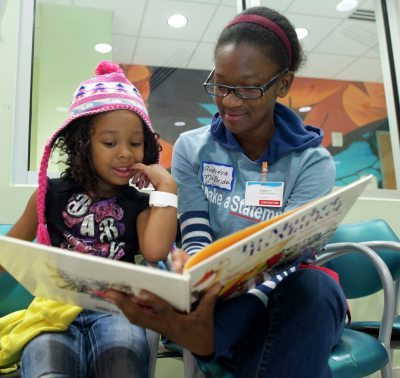 Institute for Research on Poverty Hub

College of Education Professor Julie Washington and Assistant Professor Nicole Patton-Terry have received a four-year, $2.6 million grant from the National Institute of Child Health and Human Development to develop one of four national Learning Disabilities Innovation Hubs – epicenters of research on learning disabilities.

Washington and Patton-Terry will focus on African-American children in first through fifth grades, and conduct research in metro-Atlanta area school systems with large populations of African American students to differentiate between those children who have learning disabilities and those for whom language variation and socioeconomic status play a large role in their struggles to read and write.

“Our goal in applying for this grant was to address an issue that we knew people weren’t really addressing in this population of students,” Washington said. “They’re not always identified as learning disabled. They’re usually talked about as being ‘struggling readers,’ and we wanted to not only take on the learning disability issue, but another issue that people let color how they address this issue, and that’s poverty. We want to figure out which issues are true poverty issues and which issues are true learning disability issues.”

Washington and Patton-Terry will be teaming with co-principal investigator Mark Seidenberg, the Hilldale and Donald O. Hebb Professor of Psychology at the University of Wisconsin-Madison, and Wisconsin-Madison’s Institute for Research on Poverty to identify different subgroups of students with reading problems and collect data on why these students struggle with different literacy skills.

This could lead to new intervention methods for struggling readers, more accurate diagnoses of students with learning disabilities and further research on middle and high school students’ literacy skills. It also may provide valuable research for metro-Atlanta school systems and the other Learning Disabilities Innovation Hubs to use in examining how best to address issues such as poverty and cultural and linguistic diversity in diagnosing and treating learning disabilities.

“We want to link this research to what is happening in elementary schools around the corner and across the country, and translating that into what teachers and families can do to support students,” Patton-Terry said. “This is the beginning of what we hope is a long-term partnership with the community and other researchers.”

For more information on this grant, visit http://projectreporter.nih.gov/project_info_description.cfm?aid=8458677&ic